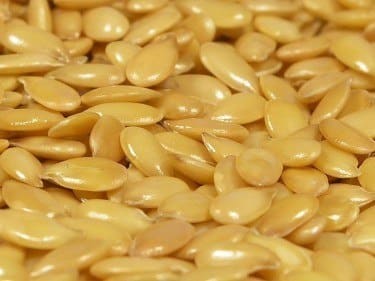 Flaxseed oil is a deep, golden oil with a light and nutty flavor. Made from flax seeds, which have been used medicinally for thousands of years, there are many flaxseed oil benefits for your health.

Flax oil is the highest known source of omega-3 alpha linolenic acid, an incredibly important fatty acid that combats inflammation and prevents many diseases within your body.

While it can provide an excellent source of omega-3 fats for everyone, there are different reasons why flaxseed oil is important for both women and men, especially a popular new kind known as high lignan flax oil.

Here are 7 flax oil benefits and great reasons to take it regularly for better health.

Lignans are phytoestrogens and are present in many seeds, grains and vegetables, but flax is the richest dietary source. They are metabolized in the digestive tract into enterolactone and enterodiol.

These compounds are structurally similar but a lot less potent than estradiol, the most common form of estrogen in women’s bodies.

Excess estradiol has been strongly associated with hormonal cancers like breast cancer and cancers of the reproductive system. These are some of the most commonly occurring cancers to affect women in America, particularly postmenopausal women.

The lignans in flax seeds exert a much weaker estrogenic effect on receptor cells than estradiol. When they arrive at receptor cells before other estrogens, they block them from having potentially negative effects on breast, uterine or cervical tissue. In this sense, lignans are generally considered anti-estrogenic.

Not all flaxseed oil contains useful levels of lignans. If you’re interested in getting the antiestrogenic effects, along with the plentiful omega-3 fatty acids, then it is important to look for a good high lignan flax oil like this one I use with fine flax particles added back into the oil.

Ground flax seeds are an even better source of lignans, but ideally they would be from fresh organic seeds and be produced with cold milling. Flax meal should come in an airtight packet, be refrigerated and, once opened, used relatively quickly to preserve the freshness.

This is the best tasting organic ground flax I’ve found and use in my kitchen. It is great in muesli in the morning or added to smoothies and shakes.

Like flax seeds, flax oil with high lignan content may provide some protection against hormonal cancers such as breast cancer and endometrial, ovarian and cervical cancer, by diminishing the action of the strong estrogen estradiol.

This is particularly relevant for postmenopausal women, who are also most likely to be diagnosed with these types of cancers. While it must be said that scientific research on the effects of lignans on various cancers has been mixed, recent studies, such as this one on postmenopausal breast cancer, show significant potential.

It’s likely there are far too many factors that contribute to hormonal cancers like breast cancer for results to be conclusive. That said, high lignan flaxseed oil is a very nutritious superfood, both for its exceptional omega-3 content and its anti-estrogenic lignans.

3. Estradiol and Flax Oil for Men

The estrogen estradiol can also play havoc in men’s bodies. While many men fear having anything in their diet associated with estrogen, phytoestrogens are actually more likely to compete with estradiol at the receptor sites in the body than have strong estrogenic effects themselves.

Men have fewer of these receptor sites and the effects of phytoestrogens like lignans are significantly weaker than more potent forms of estrogen like estradiol.

As men get older their testosterone levels generally decreases, while at the same time estrogen production increases. Even mildly elevated levels of estrogen are believed to increase a man’s risk for heart disease, stroke, prostate cancer, osteoporosis and other serious diseases.

Having flaxseed oil with added lignans or delicious ground flax seeds like these in the diet regularly may help reduce some of the damaging effects of estradiol experienced by many older men and women.

Omega-3 fatty acids such as alpha linolenic acid (ALA), and 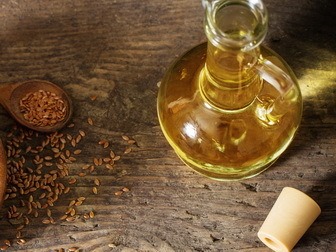 the eicosapentaenoic acid (EPA) and the docosahexaenoic acid (DHA) that can be derived from it, are vital for good health and disease prevention, especially diseases of inflammation.

They are one of the building blocks of healthy, well functioning cell walls and are needed for proper intracellular communication. Given their importance at such a basic structural level, an omega-3 deficiency can lead to a wide variety of health problems.

Some of these include decreased brain function; learning problems and poor memory; lowered immune function; an increased chance of blood clots and other circulatory system issues; hypertension; declining vision; and a recurring tingling sensation in various parts of the body.

Omega-3s are also converted to hormone-like substances called prostaglandins that are involved in many other important functions throughout the body.

It’s actually hard to overstate the benefits of omega-3 fatty acids in health terms. Yet so many of us are either not getting enough of them or have an unbalanced intake of other fats that can inhibit their proper utilization.

It’s well worth keeping in mind the ratio of omega-3 to omega-6 fats in our diet. Excessive omega-6 fatty acid consumption can create an overabundance of series 2 prostaglandins, which have been shown to potentially cause an inflammatory effect on the body.

Series 2 prostaglandins are implicated in a wide variety of inflammation based diseases such as arthritis, osteoporosis, cardiovascular disease, asthma and even various skin problems. Omega-3 fatty acids, on the other hand, are needed for the creation of anti-inflammatory series 3 prostaglandins.

Ideally, a ratio of omega-6 to omega-3 should be at least 5 to 1 and many experts recommend closer to 2 to 1. With the relentlessly increasing addition of cheap, processed polyunsaturated fats into common supermarket foods, many Americans are now estimated to have an omega-6 to omega-3 ratio of at around 20 to 1, perhaps even as high as 50 to 1, in favor of potentially inflammatory omega-6 fats.

A good intake of omega-3 fatty acids in the diet has been shown to lower both LDL cholesterol (the damaging kind of cholesterol) and triglyceride blood levels. Both are well known risk factors for cardiovascular disease.

Omega-3s also have a vasodilatory (they widen blood vessels) and anti-atherogenic (reducing the formation of atherosclerotic plaques) effect on the cardiovascular system, leading to a reduced risk of heart disease and atherosclerosis.

Additionally, good levels of omega-3 fats in the diet may help prevent blood platelets sticking together and forming dangerous blood clots that can cause strokes.

A good source of omega-3 like a high quality organic flaxseed oil or fish oil is extremely important for maintaining a healthy heart and may help to prevent some of the deadliest diseases affecting people in Western societies.

Omega-3 fatty acids are believed to help lower some of the adverse metabolic effects of insulin resistance in diabetes by reducing triglyceride levels and lowering blood pressure. Omega-3s may also benefit circulation problems, often experiencing in those suffering from diabetes, and improve overall nerve function in general.

High EPA/DHA fish oil could be a better choice for diabetics than flaxseed oil. This is because people with diabetes may have less of an enzyme called delta-6-desaturase that is needed to convert alpha linolenic acid to EPA and DHA. 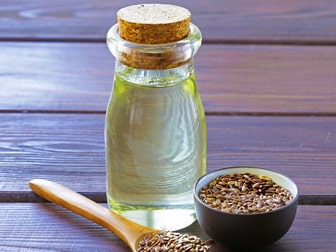 Research suggests the deficiency in omega-3 fats can predispose a person to psychological disorders such as depression. Recent studies, like this one on treating depression with omega-3, have shown EPA/DHA supplementation is useful for treating diagnosed unipolar depression.

For milder, occasional depression symptoms it may be even more effective. Obviously see a qualified practitioner if you believe you may be suffering from depression, but omega-3s appear to have an important role to play in healthy brain function.

Improving Your Health and Appearance with Flax Oil

With a high omega-3 intake affecting so many aspects of your overall health, there are of course many other flaxseed oil benefits that you may experience when taking it regularly.

It is important though to be aware of some potential side effects, especially if you are on blood thinning medication, being treated for diabetes or pregnant.

Ahead is also a look at how you can use flax oil for both strong and shiny hair and better skin and even to help with natural weight loss.

Do you take flaxseed oil for its beneficial effect on your health and appearance? I’d be interested in any changes and improvements you’ve noticed since you started taking it.