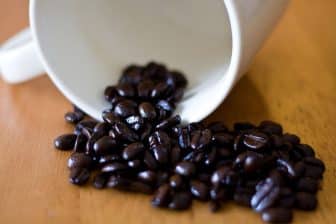 After doing the research for this post, I gave up coffee. I’m done with it.

I took the last I had to work as an offering to the caffeine addicts there and replaced it with a caffeine-free, coffee tasting substitute I’ll share ahead. It was actually easier than I’d expected.

Giving up their daily caffeine fix is a scary thought for some people. Many of us are far more addicted to this legal drug than we’d like to admit to ourselves.

What I hope to offer with this post is some motivation and momentum to give up coffee. I’ll do this by covering the damaging effects it can have on your gastrointestinal tract and the way these effects lead to various health issues and digestion problems, including flatulence.

And for some good news, in following posts I’ll go into some of the best ways to beat a caffeine addiction by replacing coffee with healthier alternatives. Just making this one change in your drinking habits could make a dramatic difference to your health and sense of well being in your daily life.

OK, if you’ve made it this far without being scared off then let’s get started.

Coffee contains various oils, acids and compounds like caffeine that can harm your stomach and intestines by irritating their linings. When you drink coffee your stomach produces large amounts of hydrochloric acid (HCl).

This overproduction of HCl is especially pronounced if you drink a cup of coffee on an empty stomach, making first thing in the morning probably the worst possible time to drink coffee.

The body can have a limited ability to make hydrochloric acid, particularly if we are nutritionally deficient or under stress. By drinking regular cups of coffee you are kicking HCl production into overdrive. Do this for long enough and your body’s capacity to produce hydrochloric acid may be reduced.

When there is a shortage of hydrochloric acid for digestion, we run into problems breaking down and utilizing protein in particular. This directly affects flatulence issues because undigested, fermenting protein is food for the intestinal bacteria that create, among other gases, hydrogen sulfide (rotten egg gas), for those really smelly farts.

Right at the start of digestion, coffee can cause heartburn (acid reflux) by relaxing the esophageal sphincter muscle. Caffeine is known to have an effect on this muscle but the problem occurs even with decaffeinated coffee.

In fact, apart from minimizing the jittery, fight or flight response from the caffeine, decaf does not seem to fare much better in the health stakes than regular coffee. It has most of the same irritating oils, acids and compounds, the same diuretic, laxative and mineral blocking effects and has actually been shown to be even more acid forming in the gastrointestinal tract than regular coffee.

Decaf may have a temporary role in giving up coffee for somebody looking to let go of their addiction, but it’s not a long-term solution if you value your health and energy. Besides, in the post on coffee replacements there is something far better.

Coffee is a well-known irritant for those suffering from IBS, gastritis, Crohn’s disease, colitis and ulcers and most doctors advise it be avoided for sufferers.

In fact, while ulcers are believed to originate from the Helicobacter pylori bacteria, coffee’s acidic effect on the stomach may help provide suitable conditions for the bacteria to access the stomach lining in the first place.

Coffee is often cited as an intestinal irritant for anyone suffering gastrointestinal problems. It seems it’s not the caffeine that is as much of a problem as certain enzymes in the coffee beans themselves. This is why switching to decaf for IBS or ulcer sufferers rarely works.

Coffee is acidic and can prevent the healing of an already damaged GI tract. Once again, regular or decaffeinated makes no difference in this regard.

Some people actually use coffee deliberately as a laxative and it can indeed stimulate the process of peristalsis that sends us to the bathroom. The problem is, coffee appears to stimulate gastric emptying of the stomach before food has a chance to properly digest. The acidic stomach contents are dumped into the small intestine too early and may cause injury or inflammation to the very place that is supposed to be absorbing most of the nutrients to keep us alive and healthy. More undigested food also usually equals more flatulence problems.

The laxative effect of coffee is so strong in some people it has been observed only four minutes after drinking it. Decaffeinated coffee has been shown to have the same effect so researchers don’t think caffeine is solely responsible. Another mark against decaf coffee for stomach problems and gas unfortunately.

The caffeine in coffee is a strong diuretic in the human body. In large doses it can increase fluid flushing through the kidneys which leads to a frequent need to pee, loss of minerals and other important nutrients and dehydration.

Dehydration may actually lead to weight gain in a roundabout way. When we are dehydrated the body has a strong need to replenish water but our brains often seem to mistake this signal for the feeling of being hungry. So we reach for a snack (often a salt laden one, making dehydration even worse) when what we really need is more water.

The next time you feel like you need a snack outside of normal meals, try a large glass of water first. There’s a fair chance you’re just dehydrated. 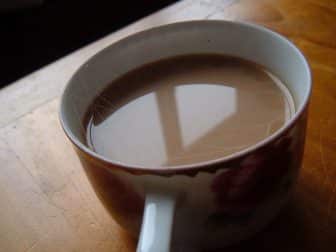 Drinking coffee may restrict our kidneys ability to retain magnesium, calcium, zinc and other important minerals. Iron absorption in the stomach can also be heavily impaired if coffee is taken at the same time as an iron rich meal. All of these minerals are required in the complex process of digestion at some point.

Reduction in the already hard to get magnesium is especially worrying digestion wise as it is needed to maintain bowel regularity. Many people are deficient in magnesium but unfortunately magnesium supplements are not particularly well absorbed.

If you are not getting enough from your food a better way to replenish magnesium in your body is magnesium oil that you spray directly onto your skin. Magnesium oil has been shown to have a much better absorption rate than standard magnesium supplements.

Magnesium plays an important role in regulating how our bodies convert food into energy and symptoms such as fatigue, low energy, muscle tension, headaches, anxiousness, irritability and inability to sleep have all been linked to magnesium deficiency.

If you suspect you might not be getting enough magnesium (or drinking coffee has inhibited its absorption), magnesium oil sprayed directly onto your skin after a shower can help replenish your body’s magnesium stores. I have personally noticed a real reduction in muscle tension and an improvement in my energy levels since using it.

Hormones like adrenaline are supposed to trigger when we are in danger and need to respond quickly. They are not meant to be ‘on’ all the time in the way drinking coffee can make them. Is that jittery rush caffeine gives us really energy? Wouldn’t a better word for it be anxiety?

This increase in stress hormones can also inhibit the process of digestion, particularly in the stomach. This is due to the way the body takes blood and resources away from the digestive processes in preparation for a potential threat. A threat that never comes (though indigestion, bloating and flatulence problems may well).

Both of these functions are important for healthy digestion and indeed overall health and well being. Unfortunately, caffeine interferes with the way GABA binds to its receptors to provide that calming influence on both the brain and the GI tract (Ever tried slowing down and being very calm after a strong cup of java?).

As a final parting shot to your stress levels, coffee can also cause an increase in the excretion of B vitamins, which are central to relaxation and stress management.

Last Thoughts on Coffee and Digestion

I am well aware there are many people out there who won’t want to hear all of these bad things written about their good friend coffee. But is it worth asking ourselves, what kind of friend does this kind of damage to our digestion and our health in general?

Caffeine addiction is a very common problem in Western societies and digestive problems, heightened stress and anxiety and sleeping disorders are only a few of the health issues it can create.

Can you get away with a cup or two a day without obvious issues? Maybe. But then again, anyone reading a website on flatulence and gastrointestinal problems is probably aware that they have an issue or two, even if it’s not that obvious yet.

Wouldn’t it be better to address some of the causes of those issues before they become even more obvious and less easy to deal with? Besides, in the particular case of coffee, if you’re not addicted to it, then it can’t hurt to replace it with a healthier alternative for a couple of weeks and see how it makes you feel – can it?

Actually, giving up coffee doesn’t have to be that big a deal. Using replacement therapy, where you substitute coffee with something refreshing that gives a better type of energy, like strong peppermint or ginger tea, alongside these caffeine withdrawal remedies, can help you get through the first week. It’s usually pretty smooth sailing after that.

The next page has 3 steps to replacing coffee and a bunch of great alternatives (one even tastes like coffee but is alkaline rather than acidic and actually quite healthy). Following on from there is a detailed plan for coffee replacement with specific steps for minimizing withdrawal to help you give up coffee easily and permanently.