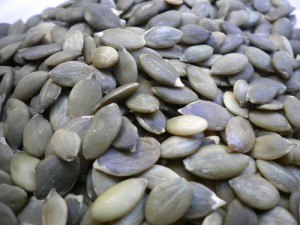 Pumpkin seeds offer a broad range of minerals, vitamins, essential fatty acids, phytosterols, protein and other nutrition that makes them a particularly healthy snack or recipe addition for anyone.

High levels of the hormone dihydrotestosterone (DHT) circulating in the body may cause many health issues for men, especially later in life. DHT is believed to be a prime culprit in both hair loss, leading to male pattern baldness, and prostate enlargement, also known as benign prostatic hyperplasia.

DHT attaches to the hair follicles on the head in men, particularly at the temples and on the crown, and shortens their growth phase. Over time, this leads to thinner and weaker hairs and noticeable hair loss.

If the effect of DHT continues in this way, the hairs on the head simply stop growing in certain areas. This is seen in the common hair loss condition known as male pattern baldness.

Dihydrotestosterone is a powerful androgen that is converted from testosterone. While DHT is useful for developing male characteristics as a younger man, once you get older too much of it can be a significant problem.

Pumpkin seeds contain two compounds that are known as DHT blockers. The first is the phytosterol beta-sitosterol, which has been shown to inhibit the enzyme 5-alpha-reductase that is responsible for converting beneficial testosterone to dihydrotestosterone.

The second is a steroid called delta-7-sterine that is much less powerful than DHT. Delta-7-sterine may help block DHT by specifically competing with it at the cell receptor sites where it does its damage, such as at hair follicles and in the prostate gland.

Snacking on pumpkin seeds, like these great tasting ones, can be beneficial to men as they provide these DHT blocking nutrients. A reduction in hair loss and better hair in general is often reported by men who eat pumpkin seeds regularly or use pumpkin seed oil.

The same DHT that is responsible for hair loss and male pattern baldness is also strongly implicated in prostate enlargement in men, also known as benign prostatic hyperplasia. BPH is a painful condition where sufferers experience problems urinating due to an enlargement of the prostate gland that constricts the urethra.

BPH is a common problem in America, especially in older men. Yet the incidence of prostate enlargement has been found to be considerably lower in countries where pumpkin seeds are often eaten, such as Hungary and Austria.

Eating pumpkin seeds on a regular basis may help alleviate the symptoms of BPH and even reduce prostate enlargement.

Once again the beta-sitosterol blocking the conversion of testosterone to dihydrotestosterone, and the delta-7-sterine competing with DHT in the receptor sites of the prostate gland are believed to be responsible for this beneficial effect.

A study of treating BPH with phytosterols from an extract of pumpkin seeds showed prostate enlargement symptoms were ‘significantly improved in the treatment group’.

Zinc and Other Minerals

High levels of zinc in foods have been associated with reduced prostate problems and a lower risk of BHP. Zinc is also an antioxidant and anti-inflammatory with an important role in the production of vitalizing hormones like testosterone.

Pumpkin seed nutrition also includes good levels of the minerals magnesium, phosphorus, manganese, iron and copper. So many men are deficient in minerals like magnesium and zinc and pumpkin seeds are an easy and enjoyable way to increase your intake. 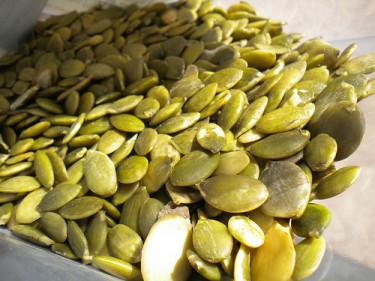 Phytosterols are compounds may reduce the level of cholesterol in your blood and help to build up your body’s immune response. Recent research, like this study on phytosterols and cholesterol metabolism, suggests phytosterols may be beneficial for men at risk of developing heart disease.

Pumpkin seed benefits include around 260 mg of phytosterols per 100 grams, which is a significant amount, and may help older men preserve their cardiovascular health.

Pumpkin seeds are a good source of tryptophan, the amino acid that converts to the neurotransmitter serotonin in the brain. Serotonin is important for men coping with stress and deficiencies can lead to depression, difficulties sleeping and even ongoing insomnia.

Pumpkin seeds are also a fairly good source of certain B vitamins which help regulate mood. Combine this with the tryptophan mentioned above and pumpkin seeds look like a great food to eat for tired and stressed out men.

Raw pumpkin seeds are much healthier than snacking on crisps or other fattening junk food. If you’re a man concerned about hair loss or prostate enlargement, or would just like a great source of minerals, heart protecting phytosterols and stress reducing tryptophan, then give a bag of pumpkin seeds, like these delicious bestsellers, a try.

Another option, to add even more of pumpkin seeds fat soluble nutrients to your diet, is rich pumpkin seed oil. It tastes great and is a much more concentrated version of the pumpkin seeds benefits for men.