Probably the hardest parts of giving up coffee is coming off caffeine. Symptoms often include irritability, fatigue, difficulty concentrating and the well known caffeine withdrawal headaches.

The good news is there are a few natural remedies you can easily use to greatly minimize caffeine withdrawal symptoms.

For some people, coffee and its caffeine have provided that jittery jolt for so long, it’s what they think of as energy now. But real health based energy, derived from a good diet full of fresh nutrient rich food, is much more stable, long lasting and powerful.

Letting go of coffee is a good time to switch to eating more healthy foods to support your body during the transition. Focusing on eating better food, particularly in the first few days after you stop drinking coffee, should help lessen caffeine withdrawal symptoms.

Plenty of clean water in between meals and especially first thing in the morning is also very important to lessen any withdrawal symptoms, especially caffeine withdrawal headaches.

There were two caffeine withdrawal remedies that I used when giving up coffee recently. I believe these products played a big part in the fact that I had very few caffeine withdrawal symptoms and was able to replace coffee without really missing it that much at all.

The first of these provides adrenal support to help counteract the damage caffeine has probably done to your adrenal glands over its years of daily demands. It also provide a different kind of energy to replace the jittery caffeine adrenaline jolt.

The second is a powerful tension reliever and a unique way to increase your intake of a very important mineral that coffee drinking is likely to have depleted through your kidneys. Many people will not have heard of this product, but I’ve found it to be very effective.

The first of the caffeine withdrawal remedies I’d recommend as support for anyone quitting coffee is Panax ginseng. In particular, a high-strength, aged and prepared version known as red ginseng.

Red ginseng is an adaptogen. Which is perhaps a fancy way of saying scientists don’t exactly know how works, just that it does, in a variety of health conditions and situations, seemingly adapting to the individual body’s needs.

For our purposes in giving up coffee and the subsequent caffeine withdrawal, red ginseng can provide an energizing effect that I personally think is much better than coffee’s. It can also provide a sense of well being and support the recovery of your adrenal glands from the damaging effects of caffeine.

For my first few days of caffeine withdrawal, I used this pack of red ginseng tinctures and could feel it working within fifteen minutes of using it.

The first two days I used one soon after waking up and one before having lunch (closer to bed can be too stimulating). On following days, I cut back to one mid-morning for the rest of the week, as I wasn’t feeling any caffeine withdrawal symptoms.

Heavy users of caffeine may want to use two bottles of the tincture a day in this way for the first week. After that, try cutting down to one a day and then perhaps one every second day, until there are no obvious withdrawal symptoms.

Red ginseng is stimulating in a completely different way and can help avoid brain fog and caffeine withdrawal headaches often associated with giving up coffee. For minimizing headaches, it can be good to take the ginseng tincture quite early in the morning, even on rising or just before a shower.

Taking ginseng once you already have a headache however is not recommended. Ginseng improves blood flow to the brain, whereas caffeine restricts it.

It seems caffeine withdrawal headaches may be related to changes in blood vessels in the brain. If you get the ginseng in before a headache starts it may be able to help ease this process. If you’ve already got one though, it’s not advised to take ginseng as it’s unlikely to help and may even make it temporarily worse.

Ginseng is also not recommended when a person is sick with a heavy cold or flu or other inflammatory diseases as it can be too warming (though this would be a bad time to break a caffeine addiction anyway).

I definitely prefer ginseng tinctures made from the whole root rather than ginseng capsules with standardized ginsenosides. There may be other beneficial compounds that scientists are yet to identify and most reviews I’ve read tend to favor tinctures or extracts over capsules or tablets. 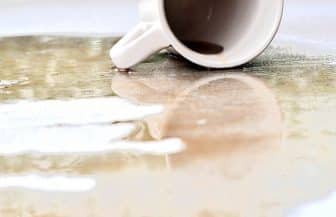 I’ve previously used standardized ginseng capsules and felt no effect from them. The ginseng tinctures on the other hand definitely have an effect.

We’re generally looking for the ginseng tinctures prepared from older roots with higher strength for caffeine addiction support. The red ginseng tinctures I used were prepared extra strong from 12 year old roots and I found them to be very effective at reducing caffeine withdrawal symptoms.

Herbal adaptogens like red ginseng are powerful. For long-term use definitely consult a knowledgeable Chinese Herbal or Ayurvedic medicine practitioner. They are generally better used occasionally in times of stress, low energy or extra physical/mental need, rather than on an ongoing basis.

The second product I was using when I gave up coffee, that I believe helped with the very mild caffeine withdrawal symptoms I experienced, was a magnesium supplement called magnesium oil.

Transdermal magnesium oil is a little different to a regular magnesium supplement in that rather than taking it as a pill (where magnesium is notoriously poorly assimilated), you spray and rub it directly onto your skin where it is far better absorbed.

It’s been estimated that around 60% of the US population don’t get adequate magnesium in their diet. There are many health issues and diseases associated with magnesium deficiency.

For the purpose of withdrawal from caffeine, its importance in relieving stress and tension and promoting relaxation is most relevant.

Magnesium is also vital for proper digestion and drinking coffee regularly is highly likely to have depleted it in our bodies as it increases its secretion through the kidneys.

A good magnesium oil should be highly saturated magnesium chloride from the Zechstein sea mineral deposits.

The one I’m using is this Ancient Minerals concentration, which, along with restoring cellular magnesium levels, also aids in detoxification, helps improve mood and relieve stress, relieves aches and pains and even encourages healthy skin.

You should know that magnesium oil can sting mildly the first couple of times you use it and it’s best to avoid sensitive areas. But this tingling doesn’t last and this effect lets you know that it’s working.

Don’t let this scare you off from using this incredible product. You may be amazed just how relaxed magnesium oil can make you feel after a week or two of using it.

Getting proper magnesium into your body also helps calcium absorption. Calcium and magnesium are involved in so many important processes in your body and greatly influence your level of health and well being.

Many of us take a calcium supplement, but it’s questionable just how effective extra calcium is without an adequate magnesium intake. Magnesium oil has been shown to be one of the best ways to balance the ratios of these vitally important minerals in your body.

Next Steps in Giving Up Coffee and Coming Off Caffeine

If you’d like to break a caffeine addiction with a minimum of withdrawal symptoms then red ginseng tinctures and magnesium oil should help to reduce the headaches and lethargy often associated with coffee reduction.

Two other important elements though are finding a replacement for coffee that you enjoy and having a strategy for reducing your intake of caffeine.

To help with this the next post has a simple 10 step plan for giving up coffee. It uses these two caffeine withdrawal remedies and the healthy coffee alternatives from the previous post to make replacing coffee as simple as possible.