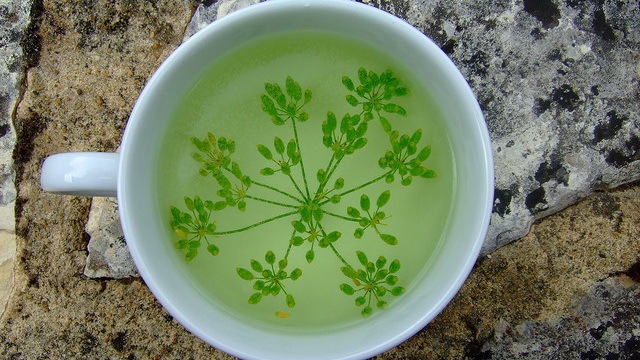 Why Fennel Tea Works for Bloating and Flatulence

Fennel seeds are a potent herbal remedy for bloating, flatulence and many other digestive problems. They have been used for thousands of years in traditional medicine and are safe, fast acting and effective.

Fennel tea is made from dried mature fennel seeds. These seeds are rich in volatile oils that relax the smooth muscles of your gastrointestinal tract on contact.

Fennel tea is one of the quickest ways known to alleviate a bloated tummy. Within minutes of drinking a strong cup of fennel tea, intestinal cramps and contractions ease, allowing the trapped gases that cause bloating to dissipate.

Fennel tea is also well known as a remedy for excessive flatulence problems. There are several reasons why it works so well.

First, compounds in fennel seeds stimulate bile production for better digestion. Next, the calmative effect of fennel’s volatile oils allows both food and intestinal gas to travel through the digestive tract more easily.

As an extra benefit, fennel tea also has strong antibacterial properties. Drinking it regularly may help control an overgrowth of gas producing bacteria in your lower intestine.

Because it is in liquid form, it’s also much faster acting than tablets or capsules. When you sip a cup of strong fennel tea it quickly travels to where it’s needed and gets to work.

There are a few potential fennel tea side effects to be aware of, but generally it’s considered so safe it is even recommended for babies as a colic treatment.

How to Make Fennel Tea

You can make homemade fennel tea by adding a heaped teaspoon of organic fennel seeds to a cup and pouring boiling water over them. Leave it to sit for 5 – 10 minutes, strain if you like and sip for relief from trapped intestinal gas in as little as 5 minutes.

For convenience, you can also use these medicinal strength fennel tea bags in the same way. They are even recommended for chronic gastrointestinal conditions like irritable bowel syndrome and there are many other health benefits of drinking fennel tea.

It’s often recommended to drink fennel tea just before a meal that may cause gas problems, like one with beans, cruciferous vegetables or dairy products. This not only stimulates the digestive process, it also relaxes the gastrointestinal tract well before food arrives and lessens the chances of bloating and cramps.

If you do experience unexpected intestinal issues, then the sooner you can brew up a cup of fennel tea the better. It’s fine to drink any time of the day or night and it can be used long term.

As you progress through this course, there should be less and less need for emergency remedies like fennel tea. However, at the outside it can provide quick and effective relief for most people suffering from bloating and flatulence problems.