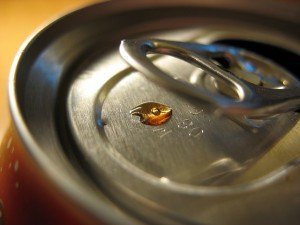 It is possible to quit drinking soda without withdrawal symptoms. Use this simple plan to replace it with new and healthier alternatives.

Before you start you’ll need your soda replacements (and enough of them to keep you going for two weeks).

Once you have those here’s the best way I’ve found to replace soda addiction with a similar tasting carbonated drink that is actually good for you.

1. The first step to quitting soda is to take whatever you have left in your house and pour it down the sink. This is an important symbol.

First thing in the morning upon waking would be a good time to do this if you think you could be tempted to drink it (no one’s so far gone that they actually have cola for breakfast are they?).

2. If you used to drink caffeinated soda like cola, and it was the main source of caffeine in your diet (you don’t drink coffee or caffeinated tea), then the caffeine withdrawal remedies in the series on How to Give Up Coffee will be just as important here and worth considering.

While cola generally doesn’t have as much caffeine as coffee, most people drink far more of it and the net effect would be similar. I found red ginseng tinctures and transdermal magnesium oil very effective at combating caffeine withdrawal symptoms when I recently gave up coffee.

If you’re still drinking coffee or another source of caffeine while you quit cola, the red ginseng tinctures and magnesium oil aren’t as essential (though the magnesium oil would likely be of great benefit for general health).

Perhaps once you conquer your soda addiction and feel the benefit to your health and well-being, giving up coffee too can start to look more appealing. This page on what coffee does to your digestion would be a great place to start for some motivation.

If cola was your main source of caffeine and you have the caffeine withdrawal remedies, have one of the red ginseng tinctures before breakfast and rub in some magnesium oil after showering. These two will provide a more stable and relaxed energy than caffeine’s jittery jolt.

3. Have a substantial breakfast. Eggs are a good food to have for breakfast when you’re first giving up soda as they fill you up and stabilize your blood sugar, lessening mid-morning hunger pains.

Also take your chromium, cinnamon capsules (if you’re using them) and a teaspoon of omega-3 rich fish oil.

If you prefer cereal for breakfast, while it won’t fill you up for as long and isn’t as good for your blood sugar, the combination of chromium and cinnamon with the cereal and fish oil should lessen any negative effects. Fish oil can also provide healthy omega-3 fats to help aid nutrient absorption.

4. Think about when you used to habitually drink soda during the day. If it was mid-morning or with lunch be ready with your soda alternative.

At the very first hint of a desire to have a soda, immediately make up your soda replacement. We are not trying to use willpower to resist the soda addiction. Rather, we are training in a new healthier habit to replace the old one.

It is important at the start to make this a ritual and be extra aware of the process. If you’re using the superfruit concentrates for instance, you might start with a couple of blocks of ice in the bottom of the glass. Pour a good shot of the concentrate over the ice and notice the rich, deep color.

Add the sparkling mineral water and watch it all fizz up. As you raise it to your lips, really take the time to appreciate the sensation of drinking it.

The more making up your cola alternative can become a new ritual you enjoy, the easier it will be to quit soda for good. Try not to compare the taste with cola or any other soda, but more to appreciate this new, special and healthy drink.

5. If you’re removing the main source of caffeine from your diet by quitting soda, have another red ginseng tincture before lunch on an empty stomach.

Ginseng too late in the day can be a little too energizing for some people. However taken before breakfast and lunch, these tinctures can help replace caffeine’s rush around energy with a more stable and balanced one. At the same time, they are supporting your adrenal glands as they start recovering from the damage caffeine has done to them.

6. Like breakfast, lunch would ideally be based around a healthy protein source. Organic chicken in a large, leafy green salad or sardines in a spicy tomato sauce with steamed veggies would be a good example.

Once again, take your chromium, cinnamon and fish oil. If your multivitamin dosage instructions allow up to three capsules/tablets a day and you want as much support as possible, you could take another one of these with lunch. If it is twice a day, then breakfast and dinner would probably be better.

7. Continue to match your soda replacement with whenever you feel like a soda. Take your time and enjoy making it and the sensation of drinking it.

Just quitting any habit with willpower alone is much less likely to be effective in the long term than replacing the old habit with a new ritual. Make a pact with yourself that if you feel like a soda you can have one, just that it will be this new healthier alternative.

If you want to cut down the amount you drink, even using something healthy like the superfruit concentrates, save that for after the first two weeks when the new habit has been in place for long enough.

8. Have a healthy mid-afternoon snack. I like a mix of nuts and fruits for a balanced energy. Eating smaller meals every 3 to 4 hours keeps a more stable blood sugar and helps prevent sugar cravings.

Eat as healthily as you can for these next two weeks while you quit soda. Obviously, it’s very important to avoid fast food outlets where they virtually assume you’ll be having a large cola with your greasy burger and fries. If you’re serious about stopping drinking soda you’ll avoid these places like the plague. 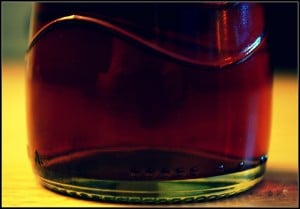 9. As with other main meals of the day, try and base dinner around a healthy protein source like fresh fish and steamed vegetables or organic chicken in a stir-fry, rather than overloading on carbohydrates with pasta, potatoes or rice.

Have your multivitamin and other withdrawal support remedies with dinner. For me, after dinner is the time I really seem to need to watch out for carbohydrate cravings. I find taking chromium with dinner makes a huge difference in stopping these.

10. Over the next two weeks continue to allow yourself to have your soda replacement whenever you feel like it. It is really important for your mind to start linking up the sensation of wanting a soda with the new healthy drink, rather than the old unhealthy one.

Check your soda alternative and caffeine withdrawal/sugar cravings support products supplies and make sure you have enough to not run out. If you’re using the superfruit concentrates there many different varieties to choose from and it could be worth experimenting with some new ones after the first two weeks to find one you really like.

By the second week, your caffeine withdrawal symptoms should be lessening and you could start reducing the ginseng tinctures down to one a day.

Likewise with the sugar cravings remedies. If you are taking them twice or three times a day, you could try reducing down to once or twice.

They are always best taken with the meal where know you are most likely to be hungry again a few hours afterwards. I’d probably recommend staying with chromium for a while, perhaps just once a day, since it’s so effective at diminishing cravings.

There’s the ten steps to quit drinking soda and replacing it with a healthy alternative. If you can follow it for two short weeks, I really believe this plan will give you a great chance of stopping soda addiction and improve your overall health and energy levels.

If you have any experiences, questions or suggestions, feel free to add a comment below. Also please share this soda replacement plan with your friends. Making this change is one of the most important things a soda drinker could do for their health.