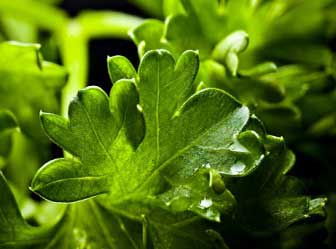 While there are many health benefits from eating parsley regularly, pregnant women, people taking blood thinning medications, and those suffering from kidney or gallbladder diseases are not advised to have large amounts of parsley in their diet. Here’s why.

Amongst its many other properties, parsley is considered a emmenagogue in herbal medicine, meaning it can stimulate the uterus and potentially lead to uterine contractions.

It contains volatile oils that, while usually beneficial and healthy for most people, may pose a problem for women during pregnancy at high levels.

The volatile oil apiol in parsley is of particular concern since it was once isolated and sold as a abortifacient to stimulate miscarriages.

This same effect can make higher doses of the herb in parsley teas, tabbouleh or this liver detoxifying parsley juice useful for stimulating delayed periods and relieving the symptoms of PMS.

The small amounts of volatile oils you’d ingest in a sprig of garnish or having it as a minor ingredient in a meal is not considered a reason to avoid eating parsley during pregnancy.

It would however be advisable to minimize your use of large amounts of fresh parsley or other concentrated sources of the herb if you’re pregnant or trying to be.

Parsley is a well recognized herbal remedy to stimulate a woman’s period, particularly when it is overdue. This may make it useful for starting menstruation when you are sure that pregnancy is not the cause of the delay.

Many women have written on health forums that they find parsley’s ability to encourage menstruation helpful, especially after coming off the pill or recovering from hormonal health problems.

Parsley teas like this are often recommended for bringing on a period. Let the tea steep for at least 10 minutes to make a strong brew.

Some women find just 1 cup of parsley tea brings on their period later in the evening or usually the next day. Others need 3 or even 4 cups to start menstruating the following day. It’s not advisable to drink any more than this a day.

Though if you experience difficult periods regularly it would be best to start with just 1 cup of parsley tea for the first day and increase this on the following day if it doesn’t bring on your period.

Stronger forms of the herb like parsley juice or tabbouleh can also work, though it’s more difficult to find an effective dosage for menstruation with these than with using parsley tea.

Parsley is extremely high in vitamin K, which helps regulate calcium metabolism in the body and is a key component used in blood clotting.

Vitamin K is an important nutrient for most people to get more of, but doctors often advise patients on blood thinning medications to minimize high vitamin K foods like parsley, spinach, broccoli and kale.

This is because these medications actually work to disable vitamin K’s function in the blood, so having too many vitamin K rich foods like parsley may make blood thinners ineffective.

It would be best to discuss eating large amounts of the herb with your healthcare professional if you are currently using blood thinning medication like warfarin or daily aspirin.

Parsley does contain compounds known as oxalates that may be best avoided in large amounts by people with known kidney or gallbladder problems. Other nutrients in it however are considered beneficial for general detoxification, including of the kidneys.

Discuss using parsley with a knowledgeable healthcare professional if you are concerned about oxalates. However the level of high levels of nutrition in parsley would generally be thought of as far more important than an concerns about the small amount of oxalates contained in the herb.

Handling large amounts of fresh parsley has been known to cause allergic skin reactions or make the skin more sensitive to sunlight. This may also be something to consider if you decide to use parsley as a face treatment for acne as well, though just one application is unlikely to have much of an effect.

Genuine parsley allergic reactions are considered very rare, but the chances of a parsley allergy are increased in people allergic to vegetables and herbs from the same family like carrots, coriander, celery, dill or fennel.

These are a few of the parsley precautions and potential side effects to be aware of, especially important with regards to using parsley during pregnancy.

However, for the vast majority of people who aren’t pregnant or on blood thinning medications, the significant health benefits of parsley will far outweigh any potential concerns.