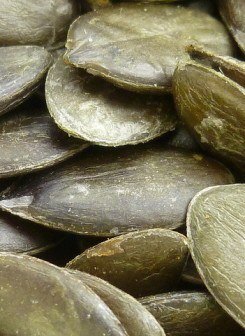 Deep green and delicious, pumpkin seeds are a nutrient rich snack that offers many benefits for better health.

Here’s 6 reasons why pumpkin seeds are so good for you, including preventing hair loss and prostate enlargement, kidney stones and bladder problems, treating arthritis and improving your skin.

These benefits of pumpkin seeds also include high levels of nutrition and the end of this article has the best Styrian and USA grown, raw and organic pumpkin seeds I’ve found if you’d like to start including them in your diet.

Dihydrotestosterone (DHT) is an important male hormone but excessive amounts circulating in the body can cause problems, particularly later in life for men. High levels of DHT are implicated in both hair loss, resulting in male pattern baldness, and an enlarged prostate, also known as benign prostatic hyperplasia.

DHT will attach itself to the hair follicles on the scalp, especially around the temples and on the crown, and shorten their anagen growth phase. Prolonged exposure to excessive dihydrotestosterone results in thinner and weaker hairs and eventually visible hair loss known as male pattern baldness.

Pumpkin seeds have many benefits for men and are rich in two different substances that are known to be DHT blockers.

The first is a mild steroidal compound called delta-7-sterine. Much weaker in its effects than DHT, delta-7-sterine competes directly with dihydrotestosterone at certain cell receptor sites, like those found in hair follicles and in the prostate gland.

By outcompeting and blocking DHT at the receptors, delta-7-sterine may help reduce some of DHT’s negative effects on your hair and in other parts of your body.

The second DHT blocker in pumpkin seeds is a phytosterol known as beta-sitosterol. This compound blocks dihydrotestosterone by inhibiting the enzyme 5-alpha-reductase that is responsible for converting highly beneficial testosterone to problematic DHT.

Snacking on raw pumpkin seeds regularly can provide a dose of these DHT blocking compounds into your diet and possibly help maintain a little more free testosterone. There’s no guarantee that this will stop male pattern baldness, but a reduction in hair loss has been reported by men who eat pumpkin seeds regularly.

The wealth of minerals like copper, zinc and magnesium, along with essential fatty acids and the many other nutrients found in pumpkin seeds may also play a part in hair follicle health and helping to prevent male pattern baldness.

These US grown organic seeds make a tasty snack with many health benefits if you’d like to give them a try.

problems urinating due to an enlargement of the

prostate. The same dihydrotestosterone implicated in male hair loss is also believed to be responsible for the rising rates of prostate enlargement in men.

This study treated benign prostatic hyperplasia with an extract of pumpkin seeds and showed the symptoms of prostate enlargement were ‘significantly improved in the treatment group’.

BPH is common in older men in the USA, yet has been found to be much lower in countries like Austria and Hungary where pumpkin seeds are often eaten. Again the combined effects of beta-sitosterol reducing the conversion of testosterone to DHT, along with delta-7-sterine competing with dihydrotestosterone at cell receptor sites in the prostate is believed to be responsible for pumpkin seeds benefits in treating BPH.

Other nutrients found in pumpkin seeds, especially the high concentrations of zinc, are also likely to be beneficial in helping to prevent or treat prostate enlargement.

Estimates have nearly 70 million Americans suffering from arthritis by the year 2030. Currently, many people living with the debilitating disease are given the anti-inflammatory drug Indomethacin. However, research has shown that pumpkin seed oil can have a similar effect to Indomethacin.

The anti-inflammatory effects of pumpkin seed oil on arthritis symptoms were also achieved without increasing lipid peroxides (a known side effect of Indomethacin that increases arthritic problems in the long run). 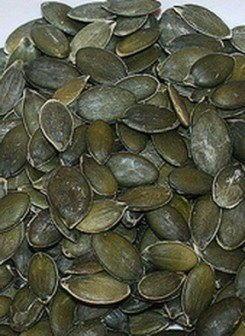 Kidney stones are formed by minerals like calcium becoming crystallized within the kidneys,

leading to stones that are very painful to pass. Recent research is showing the pumpkin seeds in the diet may help lower the risk of calcium-oxalate crystals forming within the kidneys.

The high levels of phosphorus and magnesium found in pumpkin seeds and its balancing effect on calcium circulating in your body are likely to be responsible for pumpkin seeds health benefits as a kidney stone treatment.

10 grams of raw pumpkin seeds a day has been suggested for kidney stone prevention and you need to eat them regularly for best results. As an added benefit they are a great way to get many important minerals like magnesium, phosphorus and zinc.

Urinary incontinence or an overactive bladder leading to a frequent need to urinate, particularly at night, affects many older people in America. Compounds in pumpkin seeds have been shown to help strengthen the bladder and pelvic floor and may assist in preventing or even treating bladder problems.

Recent research using a new kind of water-soluble pumpkin seed extract demonstrated significant improvement in urinary incontinence and a lowering of the frequency of nighttime urination in postmenopausal women.

One study using the extract found a decrease in the need for night time urination by 68 percent and a decrease in urinary incontinence by 79 percent over a 6 week period.

Raw pumpkin seeds have many health benefits for your skin. They are also often recommended for treating acne problems and other skin diseases of inflammation.

seeds are believed to be primarily responsible for this beneficial effect.

Raw pumpkin seeds have many other important minerals, vitamins and nutrients though and treating underlying deficiencies in your diet can often help improve your skin tone.

Zinc is particularly vital for protecting your skin as is needed to maintain the connective collagen that glues skin cells together and promotes cellular renewal.

Zinc deficiency has been associated with outbreaks of acne and overactive oil glands in the skin. Zinc helps normalize hormone levels that can lead to excessively oily skin and good levels in your diet can also improve skin healing time.

Many people report a reduction in acne problems and an improvement in the appearance of their skin in general when they get more zinc into their diet. Raw pumpkin seeds are a great source of zinc and many other essential nutritional elements. You can read more about all the nutritional properties that make pumpkin seeds good for you here.

If you’d like to start eating pumpkin seeds the green hull-less varieties make a highly nutritious snack with a rich and nutty flavor. For the most pumpkin seed health benefits look for raw, USA grown and organic, like these highly rated ones.

Pumpkin seed connoisseurs might like to try the larger Styrian pumpkin seeds from Austria for special occasions.

For ideas on using pumpkin seeds in your cooking and how to cook them straight from the pumpkin when in season see the this page on homemade pumpkin seeds.