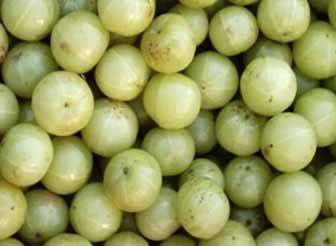 Amla, botanically known as Amilica Embillicus, is a small tree native to the Indian subcontinent that produces plum sized yellow fruit with some amazing benefits for our health.

If you’ve ever read anything about amla powder before you’ve probably heard it’s one of the world’s best sources of vitamin C.

Actually, that may not be the case. The real reasons amla is so good for you appear to be far more exotic and interesting.

Ahead is why powdered amla fruit like this one I take, a superfood most people outside of India have never heard of, could be the key to a higher level of health, well-being and energy in your life.

Also known as Indian gooseberry and amalaki, amla is one of the most important plants in traditional Ayurvedic medicine and has been prized for its beneficial properties for thousands of years in India.

It is primarily seen as a powerful rejuvenator to promote longevity and well-being in general.

In Ayurveda, amla powder is described as having a cooling effect on the body. It is known as a very beneficial aid to digestion and obtaining more nourishment from the food you eat.

According to the Caraka Samhita text of Ayurvedic medicine, it is a rejuvenator and aphrodisiac for ‘those who have been weakened by sexual indulgence and wine and poisons’ and to ‘alleviate all varieties of ailments, and impart strength to the intellect and senses’.

Amla berry is particularly revered in Ayurveda because it has a unique balance of sour, sweet, pungent, bitter and astringent tastes all in one fruit and is said to balance all three of the doshas — vata, kapha and pitta.

In doing so it is believed to help alleviate the underlying causes of a variety of health problems and even psychological imbalances.

Another Ayurvedic herb which is said to balance the three doshas is mucuna pruriens. I’ve found it to be particularly good for gently raising dopamine levels for better mood and less stress and tension in your life. Taking mucuna and amla powder together also seems to enhance the positive effects of both.

There’s a lot to be learnt from traditional systems of medicine like Ayurveda that have been healing people for thousands of years in India.

From a different perspective, what are some of the specific nutrients and compounds that have been identified in this unique fruit that could help explain why amla powder can have such a powerful effect on your health.

Amla contains a wide spectrum of vitamins and minerals, but unless you have access to the fresh fruit you’re unlikely to eat enough of it to have a significant impact on your overall vitamin and mineral intake.

What is amla good for then and just what is in Indian gooseberries that makes them so healthy?

For many years, and based on initial scientific studies, amla was believed to be an extremely rich source of vitamin C. However vitamin C alone would be unlikely to explain the unusually wide range of benefits so many people report from taking it regularly.

It seems initial tests some decades ago weren’t sophisticated enough to distinguish between certain organic acids and other compounds and classified some of them incorrectly as vitamin C, thus leading to a remarkably high figure.

It is also said to be particularly high in bioactive tannoid principles like emblicanin-A, emblicanin-B, punigluconin and pedunculagin, that exhibit strong oxidative free radical scavenging activity. Interestingly, they are also believed to significantly increase the antioxidant actions of vitamin C.

Most of these polyphenols, bioactive tannoid principles and other compounds are not household names like vitamin C. While some, such as gallic acid have a large body of scientific research behind them, others have only recently been studied (though often with very promising results).

Personally, I think what makes amla so good for you is not any specific individual element, but rather the incredible range of different antioxidants it contains.

These nutrients appear to work synergistically within the body to extinguish oxidative damage from free radicals — a primary cause of disease and aging within our bodies.

Amla powder is one of those superfoods that, in my opinion, makes supplements formulated in a lab obsolete. That’s why I use this antioxidant rich organic powdered whole fruit in my breakfast or afternoon smoothies pretty much every day. It certainly seems to wakes you up and give you more energy.

For convenience, high quality organic capsules like these are also available and make it easier to take amla at work, when travelling or if you just don’t like the taste of it.

Up ahead is a detailed guide to the best dosage to take and different ways to add amla powder to your diet so you can feel its positive effects for yourself.